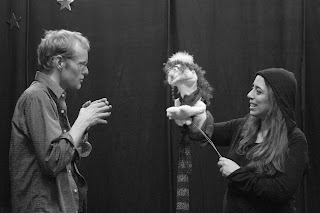 Several years ago, a friend of a friend who’d seen me in a couple of shows wanted to meet with me to discuss some film projects he was working on. He wanted someone with improv experience and he thought I might be a good fit. I met him at a café one evening. We started chatting and immediately it was going horribly. We weren’t connecting. Our conversation was choppy. I had that sinking feeling you get in your stomach when a job interview isn’t going well.

That’s when the light bulb went off: this was a job interview. I hadn’t thought of it that way, but it was. Immediately I noticed our status relationship. He was, by his nature, being very low status. I, on the other hand, had come into the meeting very high status to make myself seem important or worthy of his consideration. That was all wrong for the situation. I adjusted my status to match his but come in a little beneath him, and instantly the interview turned. We connected and talked for hours, and I left with the part (except the films never got made).

If I had never taken improv classes, that would never have happened, but I would go one step further and say if I had never performed improv that never would have happened. In performance we talk a lot about the different “brains” you have to juggle all at once on stage. You have your character brain, your actor brain, and your writer/director brain all working all at once. When you get into one of those moments where all of those things are working at once (like they were in that interview) the world seems to slow way way down. You can hear everything someone is saying and respond, while you’re thinking about a couple other things at the same time.

But is that really being in the moment? Isn’t being in the moment about being focused on one thing?
If you’re in a scene and you’re focused entirely on the space object glass you’re holding, you’re going to miss everything else that’s going on in the scene. There are a lot of things happening at any given moment. The key to being in the moment isn’t narrowing your consciousness; it’s expanding it to be aware of everything that’s happening all at once. You’re tracking the space-object glass your holding; you’re watching what everyone else is doing; you’re listening to everything that they’re saying; you’re letting your character react to what’s happening, you’re observing and perhaps altering that reaction to align it with improv best-practices and your own comfort levels and abilities; you’re tracking the story of the entire show and altering your reaction to align with the most impactful narrative; you’re also aware of the audience and how they’re reacting; you’re aware of the temperature in the theater and if it’s time for intermission or for the show to end. Everything.

Before you think to yourself “that’s impossible! I can’t track all that at once,” you’re wrong. Your brain is already tracking all of that completely against your will. Our brains track every single f*cking thing that happens to us all f*cking the time. It’s annoying. In fact, it will literally drive you insane if you’re aware of it all the time. That’s why we’re really good at NOT being aware of all those things at once. You just need to realize that you are tracking them, and let the different parts of your brain talk to each other in ways we don’t ordinarily let them.

Learn how to be aware of everything in a controlled way that you can turn on and off and not be overwhelmed by. If the mere thought of that is overwhelming, that’s probably good and normal. Realize that you don’t need to be aware of EVERYTHING. Just try to expand your consciousness to include a larger set of things than the one or two we typically focus on. I’m not saying that’s easy, but that’s the goal. And it’s a goal that improv can help you achieve. 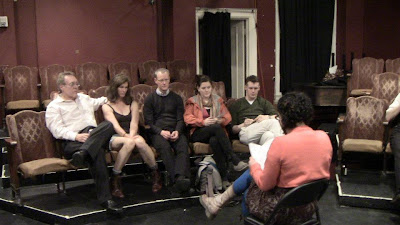 Notes after the show on Thursday.

I know I promised a blog about Tuesday's rehearsal, but honestly aside from a hysterically funny series of scenes about a jazz radio station, I don't really remember anything we did. I know we were working on large group scenes and playing to the whole house, but the rest has slipped out of my immediate consciousness.

At the show last night, I did remember something I learned the week before that I had meant to mention. I only have about 2-3 minutes of energy before the show to discuss how we want to arrange the set. After that, the whole exercise starts bringing me down and I have to disengage and leave it up to people who care. Set design is not done by committee for a reason.

Last night's show made people cry. It was called Walls of Time by Hal Gelb. It was subtle and emotional and funny and the restraints put on us by the playwright forced us to do a show we would never have improvised on our own. How so? The opening scene was Greg, a painter, on a train. He addresses the audience directly and explains that he was on his way to up state New York where an retired TV news executive wanted a portrait pained of himself and his trophy wife. I was cast as the TV executive. No one was cast as the trophy wife. The playwright did not intend for her to ever be a part of the story. In a regular improv show, we would have seen the trophy wife. Even in this show, had the playwright not specifically said she did not appear, we would have seen her. Yet her absence heightened the thematic elements of loneliness. Every main character was missing someone in different ways.

I also learned a lesson about intermission. I was backstage with a hit for the next scene, but when the scene ended it felt like intermission. Backstage, we all looked at each other wondering "was that intermission?". Then it felt like too much time had passed and we'd missed our chance. I grabbed Greg and played the scene I had a hit for. It was a fine scene, even a fun scene, but the notion that "we'd missed our chance" is a silly one of course. For one thing, a pause to a performer always feels significantly longer than a pause to the audience. They wouldn't have cared. For another, a slightly awkward delay in the intermission call is better than an unsatisfying end to the half after a tacked on scene. As a note-taker and lightician, I always get worked up when a show misses its intermission, but it's good to be reminded how easy that is to do from within a show.
Posted by Alan Goy at 6:00 PM No comments: 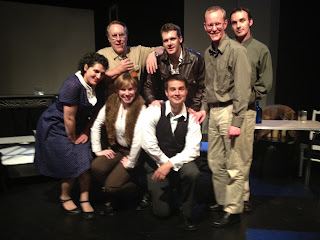 Getting Back Aaron Saenz

We had a fun weekend of shows wherein I felt like I learned a few things about my process for the show that I thought I would share independently of my rehearsal recap (to follow).

In the show Thursday night (written by Aaron), I had a huge monologue to open the show. It was a memory play, so my character was to be something of a narrator throughout. I read it several times and could hear in my head exactly how I wanted it to sound. Then when I was on stage, my mouth started speaking and the sounds coming out weren't what I was hearing in my head. Two nights later, Aaron had a long monologue to open the show as the host of the TV show the play was about. Before the show, he was running his lines backstage. I don't know why it hadn't occurred to me to actually read my lines aloud once before the show, but that was a brilliant idea. 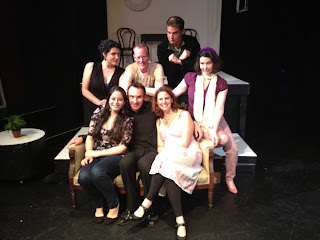 After the show Saturday night, Diana asked me if we ran through the scene once before the show. We don't, but I would love to try it, either before a show or in rehearsal (as practice, not with a show script), just to see how it would effect the improv. With the right cast, it would be great, but everyone would have to be focused on making the scene good without thinking too much about where to go next.

It might be too late in this run to give it a try, but it does seem that the better we can make the reading look, the better the show is. 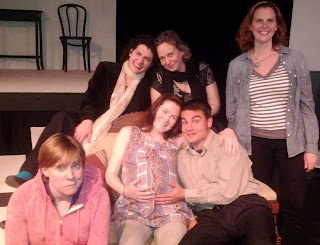 Friday night's show was written by Un-Scripted's very own Susan. Her husband Cort came to the show, who was a member of Un-Scripted back in its fledgling days. We talked after the show and he remarked at how grounded all of the characters and performances where. It's something he noticed last year during this show, and I've noticed it as well. Clearly it has something to do with starting with a scripted scene. I've been think what exactly causes it and have some ideas.

Starting with a script isn't that different then starting without one. In both instances the improvisors are making character choices right off the bat. With the script, those choices might be more informed, but in most of our shows our character choices are informed by the genre, the format, or the suggestions. So we never really start from nothing. I think the difference is that in a regular show, improvisors are also making story choices. In this show, we're not. Here, for that entire first scene all we're doing is making character choices. I think that sets those characters deeper into our consciousness than they are normally.