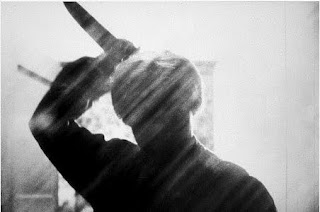 I've been wanting to do a quick run-down of my take-aways from directing and performing in Fear. I can't believe it closed only a week ago. The problem with a one-week run is that your so focused on the show opening, then suddenly it's closing you're on your way to your last show and you need to pick up gifts for your production team so they get random things you could find at Andronicos.

Then suddenly it's over.

What did I learn?

For a directing standpoint, I learned that it really doesn't matter who you kill off when. I used to think it did. I used to think you needed to find the protagonist early on so you could folllow their story and make sure they stayed alive so you don't end up telling a bad sci-fi horror movie plot that ends with the wrong character still alive.

Then I realized in a modern horror-story, especially an improvised one, you don't need to worry about that at all. In the post-Scream self-aware horror-story landscape, every convention has been turned on its head and broken for effect. Hell, you  can even trace that back to Psycho, where Alfred Hitchcock had the audacity to kill off his biggest star right at the beginning of the move. Horror stories are all about playing with expectations. If you set someone up as the hero and then you kill them off, clearly you did that on purpose for effect. If they live to the end, you must have done that on purpose too.

In improv you have the ability to adjust on the fly. If the person you all thought was the protagonist gets killed, then you're telling a different story, and you start telling that new story. In the first show, I kept Susan's character alive when she clearly wanted to be killed because, in my mind, she made it to the end of the story. Had that happened a couple shows later, I would have just killed her and saw what happened.

By the end of the run, we'd played this out to the extreme wherein the killer actually wins. The last two shows had the evil element triumph at the end of the show. Sometimes that's just the way it goes. You have to let the story be what it wants be, but I don't think we could have let the killer win until we let go the idea that certain people had to live to certain points in the show. Or maybe I just needed to let that go, but either way, we got there.

The other big lesson I took away was to communicate. In improv, you always have to walk a fine line between over-communicating your hits and not communicating them well enough at all, but there's other levels of communication as well. Twice I found myself onstage about to kill someone in a certain way and I realized I had no way to accomplish it safely with out communicating what I wanted to do to my fellow improvisor. But I had no way to do that silently. So, in both case, and in both cases it was with Merrill, I simply told her under by breath on stage what I was about to do. "I'm going to stab you in the ear." "I'm going to trip you over backwards." She knew what was going to happen and could accomplish it safely, and I'm sure no one in the audience heard or saw. There's no reason not to communicate on stage, if you can do it properly.

Then there's communicating backstage. You have a hit. What's the bare minimum of information you need to communicate to someone to put them on the same page as you? I knew I needed to do a scene with Larissa's character, but as the killer, if I just grabbed her and brought her onstage for a scene, it's reasonable to assume she'll assume I intend to kill her. That's not what I wanted. So I told her "I want to do a scene with you. But I don't want to kill you." That gave her what she needed and we could a scene on the same page. It took two sentences. I didn't detail what I wanted to happen in the scene. That was all I needed to say.

Those are the things that stuck in my mind. The cast was kick-ass. Everyone did a great job of playing intense emotions and killing each other with panache. I loved it.
Posted by Alan Goy at 2:00 PM No comments: 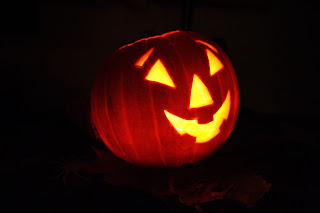 Here are show summaries for the entire run, including slightly edited versions of the three I posted previously.

Tuesday, October 25: First the Eyes
The ghost of a Civil War general returns to a rural Maine B&B, possessing one of its unwitting guests (Alan), forcing him to kill until the General (Christian) has enough power to regain human form and spend one night with his love (Susan). First the eyes, then the thorns, then the blood, and then the soul.

Wednesday, October 26: The Queen Christina
The law firm of Rogers & Rogers charters the ship Queen Christina to find an island lighthouse owned by one of their recently deceased clients. In spite of the Captain’s (Greg’s) efforts to prevent it, the ship finds the island itself, but anyone who sets foot in the lighthouse is changed forever…

Thursday, October 27: Harold’s Door
A group of teens in the town of Littleton, MT sneak into the abandoned 1950s research facility and bomb shelter under the school playground to drink and make-out, but there’s a reason the facility was abandoned. One teen’s (Christian’s) father (Bryce) has been trapped in a demon world, and he’s ready to return with his new friends.

Friday, October 28: Yellow Eye
The university grad students on Arcola Island have the lush tropical island to themselves for a winter-break archeological dig. When they learn of the lost treasure of the pirate Yellow Eye, their paradise turns into a nightmare when one student’s (Merrill’s) greed drives her to murder.

Saturday, October 29: Bogsville
Bogsville, Louisana is a pleasant, quiet town surrounded by swamp. But the murky waters hide a murkier underbelly to the town that is only revealed when Vondra (Mia) returns from her home in the swamp to visit her cousin Sheila (Susan) and runs into her former flame Mickie (Greg).

Sunday, October 30: All in the Family
The Newville Ski Lodge had been built in the 1940s by the superstitious and strict Newville family patriarch. It included 13 ski runs, 13 lifts, and an indoor apple orchard with 13 trees of 13 different kinds of apples.  His grandchildren soon learn that, even in death, he exacts strict punishment for breaking his rules through his ever-loyal servant Christopher (Alan).