Fear Rehearsals 4 and 5: Creepy and Intense

For our August rehearsal, we started out focusing on scenes with creepy undertones, hence my What is Creepy post from around then. Then we ran a couple of first halves. I knew we weren't ready yet to do a run, but I wanted to see where we were exactly. The process showed me, and the cast I think, where some of the holes we have yet to fill lie.

During the long month between our August and September rehearsals, I spent a lot time thinking about what sort of suggestion to get from the audience. Something that would solve some of the problems I could see during the half-runs in our rehearsal. In doing so, I stumbled across an idea to add a layer of narration to the show.

We spent the first half or rehearsal on Saturday playing around with it. The idea definitely has promise, we just need to work it at the next rehearsal to see if we can get it where it needs to be. I'm not describing it because it's hard to describe, and I have no idea what form it will take when all is said and done.

For the second have of rehearsal on Saturday we worked on violence and death. This is a key aspect of this show, but one I had wanted to wait to work on until absolutely necessary. We went over some improvised stage combat techniques and then we took turns doing little scenes where one character killed another.

They were intense, because as Merrill said "We're really good at it."

That's why we have always done this show as a short run. You just can't live in that sort of emotional space for very long, whether your the killer, the victim, or the audience for that matter.

Here's an early draft version of the flyer: 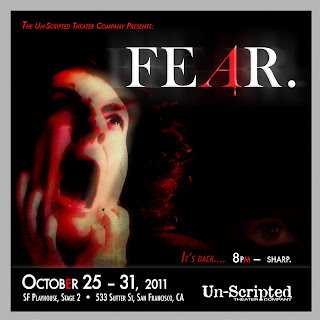