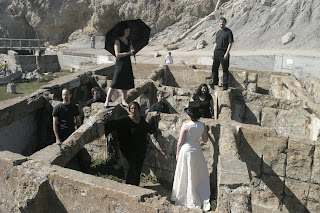 I have been grossly negligent in writing about Fear rehearsals for two reasons. One: I’ve had my head squarely up the ass of Act One, Scene Two. My role involved far more work than I had anticipated. Two: With rehearsals a full month apart, there’s just not the same pressure to blog about rehearsal right away. When we’re rehearsing every week, if I don’t blog immediately, suddenly there’s another rehearsal to write about and I get behind. With rehearsal every month, I have loads of time and then suddenly there’s another rehearsal to write about.

We’ve had 3 rehearsals, sort of. The first involved just a small group of ensemble members as we tried to decide if we had enough people to do the show as just that small group. We decided we did not, so we asked a few people to join the show. Normally we have auditions, but because of the special nature of this show (spread out rehearsals, compressed run, etc) I decided just to ask people to join the cast. I do not recommend this. It’s a lot easier to cast from a small fixed pool of possibilities than it is from the entire world.

The second rehearsal, therefore, was the first with the entire cast. We’re having longer than average rehearsals (4 hours instead of 3), and for this one we spent a great deal of time working on space-object work. Or rather, we spent a great deal of time working with actual objects. We don’t often improvise with props (although if you’ve seen Act One, Scene Two you might not know that). It was interesting to see how using props changed the nature of the scenes as well as to note how we actually use real objects differently from how we frequently pretend to use them when we improvise.

Our second full-cast rehearsal was just last weekend. As is often the case in our rehearsals, I’ve spent a great deal of time thus-far focusing on the first few scenes of the show. In the first rehearsals, we worked a lot on characters. Last weekend, we focused on building environments and worlds that we could play in. 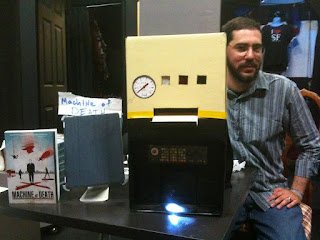 We opened Act One, Scene Two on Saturday, July 9, with a special Machine of Death cross-over event. The show's first scene was a piece written by Dinosaur Comics author Ryan North for the book Machine of Death called Murder and Suicide, Respectively. Ryan joined us for the interview by phone (he was in Florida for the final Shuttle launch), but David Malki ! of Wondermark was in-attendance (pictured above) to sign books and give out death slips. 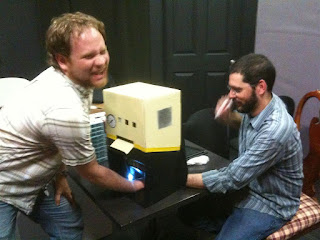 They both took part in the interview:

Dr. Isabel Rosch (Joy) and Dr. Sidney Nelson (Christian) have been developing the Machine of Death, and in so doing, have stumbled upon a genius idea: with rats and statistics, they can send a message to themselves from the future... and maybe avoid their own predicted deaths: murder and suicide, respectively. Meanwhile, director of marketing Charles (Steven) is anxious to monetize the Machine (while avoiding knowing his own results, of course). His plans are slightly derailed when Sidney inexplicably quits, having won the lottery (message from the future!), and goes on an open-ended rock-and-roll bender. As news of the Machine leaks out into the world, it attracts the attention of relatives, and then the general public; the now pocket-sized machine finds its way into every mall in America. But the tidal wave of its effects starts with its inventors: Charles is still longing for Isabel, who’s pining for Sidney, who’s gone off the deep end. While trying to avoid their predicted ends, our characters accidentally bring them upon themselves...

Now, at the end of the show, if you were there, you'll remember that Joy's character took a fall. Then Joy improvised the most realistic space-object blood anyone had ever seen. We're pleased to announce that after a night in the emergency room, Joy is alright and the proud owner of 3 staples in the back of her head. Phew. We know you like to get method Joy, but that's taking it a bit too far! 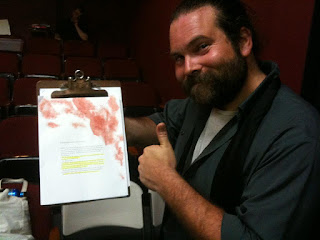 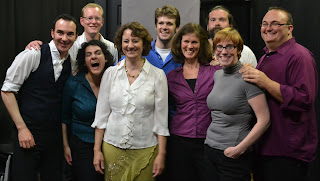 On Friday, July 8, we had our second preview featuring a fist scene from playwright Annette Roman called After the What the...!?

She didn't want to give too much away about the piece in the pre-show interview, and neither did I:

I sat next to her during the show, and based on her near constant laughter, I think we did a good job. Here's what happened:

It’s the Rapture, or is it? Samson (Greg) sits at home with his wife (Mandy), teen-aged daughter (Joy) and 8 year-old son (Steven) getting more and more agitated as the minutes of judgement day tick away. Then his spiritual leader Pastor Bob Judas (Clay) arrives to say a surprising group of people have vanished. Meanwhile, in heaven, Eve’s boyfriend Adam (Steven), Adam’s atheist mom (Joy), Eve’s transgender Aunt Jezebel (Merrill), and the old Arab immigrant couple the El Sawhis (Mandy and Greg) learn that God is going to send them back to Earth for three days. Then they can choose whether they come or get left behind. Adam tries to figure out how to bring Eve with him. Pastor Judas loses his faith and finds Jezebel, and God is too busy playing mini-golf with Gandhi to pay too much attention.

After the show we had a talk-back with the audience. We like to do these after previews so we can find out how well the show met the audience's expectations. We always learn new things and have a good time: 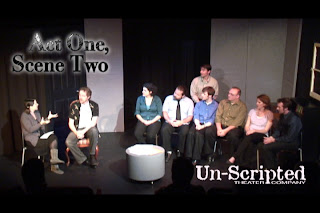 I haven't written anything yet about Act One, Scene Two except for a quick post over on Experiment Farm (read here). That post will give you the background on my involvement as the show's Literary Manager.

The first preview was Thursday, July 7, and featured a first scene by playwright and improvisor Dan Wilson entitled Silent City. In the words of Trish, the show's Assistant Director, Silent City "takes the conventional noir detective story and gives it a bitter, comic twist, complete with gender role reversals."

At the top of each show, we're bringing the playwright up onstage to interview them about their piece and about their writing-style in general. The point of this show is to improvise the piece how they might have written it, so the interview gives the performers all sorts of good information to work with. Here's Dan's interview:

The show itself was a lot of fun. Here's the "official" show summary that will go out in this week's email to our mailing list:

P.I. Carol Stone (Stacey) is a woman, a failed meteorologist, and completely deaf. Although you'd think all of those things would be a disadvantage in a town full of darkness, she has a knack for solving crimes. In her first big murder case, the seductive Brad Grube (Christian) reports his sister Maxine missing. Another lone woman crime-fighter, Detective Diaz (Mandy), pals up with Carol to solve what turns out to be her murder. Was it evil ODC-afflicted speech pathologist Herr Redding (Clay), who had an affair with her, or another of her ex-lovers, Steve Stevenson (Aaron)? Partnered by the eager, exact direction-following, incompetent William (Steven), Carol neglects repeated texts from her boyfriend Peter (Greg), putting their relationship seriously in jeopardy. However, having figured out the clues, Peter rushes to unmask Diaz as the real murderer, who confesses all in a final fit of clear communication. Peter and Carol make up and marry, and the play ends with on a happy note - just as their next case starts with William's falling through the office door, stabbed in the back.