As I did not take a picture at last night's rehearsal, here is a link to an image revealing how to explain the internet to a 19th century British street urchin, i.e. Oliver Twist.

Last night, while everyone else in the Bay Area was watching the World Series, we had rehearsal!

We started with a very useful exercise wherein we moved around as upper-class Dickensian characters and introduced ourselves to each other and talked as if at some sort of gathering. Not only did this allows to practice creating names but remembering them, as well as upper class social mores, accents, and posture.

Then we repeated the exercise as merchants or "middle-class", and finally as lower class.

This was a great way to sink into the different social strata, and reminded us all how difficult it is to remember a name you just said or heard.

We practiced this in tag-team pairs where one person would say the first bit, the other the second and the first the third, or some people went back and forth even more times adding in even more subtle gradations.

A couple of interesting things came out of this. One, we discovered how hard it is to not only remember names, but to remember place names you've just made up. We had the idea of having a book in the narrator spot where he/she can actually write down names they've just said. We're not sure if this will work or not. When writing, it's nearly impossible to clock anything else that's going on, but in theory it's a good idea.

Some people found the tag-team approach harder, some easier, and we realized that there's no reason we couldn't do that in an actual show.

We discovered we have a long way to go working out the give and take. It was hard not to talk over each other. In the most successful won that I did in that regard, Paul and I were trying so hard to not talk over each other, that we ended up with lots of very long dramatic pauses. I'm not sure how well that played.

We also learned, that the narrator can foreshadow future events by pointing out that a character would live to regret some decision or another. For minor characters you can even go so far as to tell the audience their ultimate fate when we first meet them ("so-and-so would die of consumption in 3 years time" etc).

Finally we moved into full-on scenes with a narrator, again with the narrator not only setting the scene but revealing backstory and emotion. It works very well. As an improvisor, you have a lot less work to do because the narrator is telling you your subtext. As the narrator all your doing is watching what's going on and pointing out the obvious subtext. After all, subtext is always easier to see from the outside.
Posted by Alan Goy at 3:00 PM No comments: 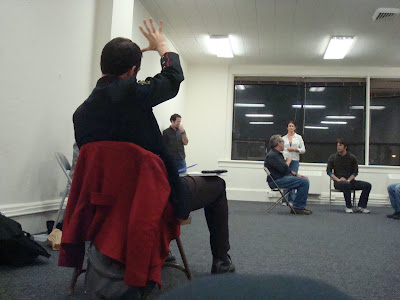 I didn't have time to write about last week's rehearsal, and it's always hard to write about a rehearsal after too much time has passed. We mostly worked on singing "Environment" and "I Am" songs. An "I Am" song is a variation on a "Need/Want" song wherein you sing about how your life is and then at the bridge imagine what your life could be like. We've discovered this is an easier way to get at a need or want because if you just try to sing about what you want, you always end up wanting love or something clichéd and general.

This Monday, we worked on scenes that lead into songs and then ran a couple 30 minute show starts. We learned that its hard to do an underdog-style training montage under a song when not everyone knows what an underdog-style training montage is. I learned that even if there is a method to my narration madness, I can't forget to pay attention to what's happening on stage and make my fellow improvisors look good. 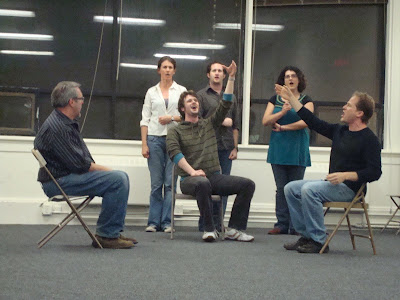 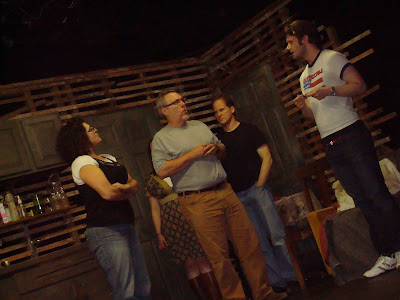 For this week's rehearsal, we focused on trying out some of Mandy's crazy Dickensian Narrator ideas across multiple scenes. The idea is that a spot will light one area of the stage constantly, and performers will move in and out of the spot and thus in and out of the Narrator role throughout the show. The stage will never go completely dark, and the gaps between every scene will be filled in by someone narrating. This, in theory, should give the show more of a "literary" or "presentational storytelling" feel.

Now, the type of narrating we're doing is already difficult. What we discovered traveling from one scene to the next is that it's also extremely difficult for the other improvisors. The natural inclination is to stand back off-stage listening to the Narrator, not only because we're trained to always be listening, but because you naturally assume because the Narrator is talking that they have a hit for the next scene. Alas, that may be furthest from the truth. The Narrator is really just saying anything to fill the time and very well may have no idea where the story should go next.

The other improvisors need to be ready to jump out on stage and "start" a scene underneath the Narrator. Their job then becomes wrapping whatever their saying around to what's happening on stage. The next problem is that once you get onstage and "start" your scene, it's nearly impossible to clock what the narrator is saying.

So there's a lot of working against traditional improv training here:

-The Narrator is not in control of the story. Just because they're talking, doesn't mean they know what the fuck is going on. You can start a scene without them. You can also tag them out of the Narrator role.

It was one of those rehearsals that made your brain hurt, which was the point I suppose. Hopefully by showtime it will be second nature.
Posted by Alan Goy at 3:00 PM No comments: 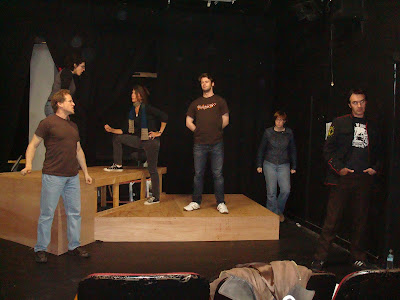 For this rehearsal, we started working on translating other genres into Dickens. We started with a simple exercise in pairs where one person would say something modern and the other person would translate that thing into the Dickensian equivalent. Such as SWAT Team = The Queen's Special Tactical Bobbies. (My favorite was "ebonics" = "Gaelic".)

Then we did a few scenes combining genres with Dickens, including Tarantino, Mamet, Romantic Comedy, and WWII Submarine Drama. (It's been a long time since I heard a Crimean War reference in an improv scene.) These were all largely successful and quite fun. I can't wait to do it for a whole show.

We finished off by practicing more environment songs, only this time we added the second genre layer to them. We did Horror, Post-Apocalyptic, 50's Over-Sized Animal Monster Movie, Sci-Fi, and Pirate. We experimented with adding a verse to the environment song, sung by someone who was an actual character in the story as opposed to a throw-away character.

I think the take-aways were:
-Leave room for other singers
-If you're singing a verse, don't sing a verse that's too far away from what's happening on stage
-You can find a traditional chorus, or returning to the phrase patter from the verse can serve as a chorus
Posted by Alan Goy at 10:00 AM No comments: