How to use a "Soft Opening" for a Business Meeting

I used a variation on the "soft opening" to start a business meeting yesterday. I'm continually amazed at how well it works. Tell people to clap, and they do!

A "soft opening" is something we use at Un-Scripted to open most of our shows. As I think on it, it's probably been years since we last started a show with anything other than a soft opening. Before the show, at least one performer comes out and talks to the audience. Then they say "the show's about to start, we're all going to go backstage and run back on, and you all are going to clap and cheer". I'm paraphrasing, but that's the idea. Then when you come out to start the show everyone cheers.

But they not only cheer. If you tell them to cheer loudly and make a lot of noise, the will do that too. Now, you can't just demand this off them. You have to present it nicely and often times saying you want them to do it because it will make the performers feel good helps. The point is though, that they do it.

What I used in my meeting today was more a variation on an old street performer trick that's basically the same thing. It was a pretty casual meeting to begin with and people were already in something of a lighthearted mood as they gathered into the room, but then as we were getting started I said something like "Ok, we want everyone who's not here to think this is the most fun and exciting meeting ever, so on the count of three everyone clap". And they did.

It does a couple things. By applauding, it tricks people into thinking they're enjoying themselves. (It's the same idea as smiling to make yourself feel happier than you really are. Once you smile, you start to feel happier because we associate smiling with feeling good.) For the purposes of this meeting (which was really more of an interactive presentation), it also helped train people to speak up and ask questions. It let them know they could participate actively. And hopefully, it does make everyone who's not in the meeting think, "what's going on? That sounds like fun." That's why street performers use it. If they get everyone to clap and cheer before they start, more people will come over to check it out.

Then everyone clapped at the end of the meeting without being prompted, because they'd been trained to by the opening.

The thing to remember when giving a presentation or running a meeting, is that these people are your audience, and they will generally act just like any other audience. Use that to your benefit.
Posted by Alan Goy at 7:00 AM No comments:

Email ThisBlogThis!Share to TwitterShare to FacebookShare to Pinterest
Labels: improv, Improv for Business

How Improv Cost Me Free Nachos

I went to go see Jaws last night at the Cerrito. They were showing it as part of their "Classics" series, and had a little trivia contest before the show. I knew the answer to the second question before he'd finished reading it, but rather than raise my hand to actually win the free nachos, I just said the answer under my breath with an air of satisfaction.

Why didn't I actually try to win? It hadn't occurred to me at all to actually raise my hand, and I puzzled over why.

The answer: I'm an improvisor.

As an improvisor, when I go see an improv show, I consider myself not really an audience member. Rarely do improvisors want to see the same things from a show that a regular audience does. So, I don't give suggestions or participate really because I don't want to push the show in a direction that my thrill me and the actors but not the rest of the crowd. I'm not representative of the audience, I don't feel.

So I've trained myself so well not to interact when interacted with, that I didn't raise my hand. And that cost me nachos.

You owe me nachos, improv.
Posted by Alan Goy at 5:00 PM No comments: 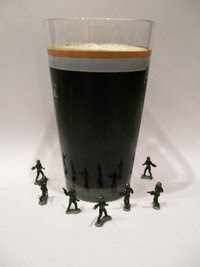 Last fall I performed in Beer Theatre at Impact. Basically a grad student was working on his thesis and needed to do some research on how medieval plays were actually performed (i.e. drunk) and wanted to test how drinking at various levels changed the performance. (I learned that when you're drunk, it's not that you don't remember your lines--because you do--it's that you just don't care.) It was super fun and everyone wanted to do it again.

Since then the student has started his own theatre company and tonight Beer Theatre is happening again as essentially a fundraiser for Front Line Theatre and Impact. 8pm at La Val's. Get there early if you want tickets. It will sell-out fast.

I'm not performing this time. I was asked and agreed to do it, but then when I realized that it no longer had a research purpose, my enthusiasm waned. And then I realized how few weekends are left before the wedding and I started to hyperventilate.

Why did my enthusiasm wane? I'm something of a nerd and the academic angle appealed to my geeky nature. Without that, Beer Theatre becomes Bar-Prov-Sports. Now Bar-Prov-Sports can be a lot of fun for performers and audience alike, it's just not my thing. I mean, Un-Scripted basically exists for the sole purpose of not being Bar-Prov-Sports and we're constantly having to fight people's assumptions that all improv is Bar-Prov-Sports.

I think that was what made the first Beer Theatre so much fun for me. It was an excuse do to that sort of thing with an actual driving reason behind it other than "hey, that would be fun".

It is super-fun though, so if you're in Berkeley tonight, check it out.
Posted by Alan Goy at 9:27 AM No comments: