Rehearsal #1: Knocking Off the Rust

Boy am I rusty! I haven’t directed anything since The Short and the Long of It in 2005, almost 4 years ago. That’s hard to believe given that at one time directing was what I wanted to do, as a career. Of course I wanted to direct scripted plays, because, you know, that’s where the money is.

My directing muscles have all atrophied. I need to do some serious work to get them back up to speed. Fortunately Christian and Mandy were both at rehearsal last night to pick up the slack when I lost all ability to articulate. Of course it didn’t help matters much that I was in the midst of a full on seasonal allergy attack coupled with the fact that we were rehearsing at Stage Werx, a wonderful space mind you, but one that I appear to be allergic to regardless of the season. All this is to say that I was stuffed up, exhausted, and generally spacey. Not good things to be when dusting off the directorial parts of one’s brain after a long period of disuse.

Under the circumstances, I think I did remarkably well. To begin with, I have a great cast. Not only do I have a full 6 ensemble members in the show, but Scott, Trish, and Jeff are all Un-Scripted veterans, and Joy, the newcomer in the cast, did improv with Clay back in Boston. So already there’s chemistry there.

I wanted to ease into things for our first rehearsal, so we started with my favorite name game and then moved into scene work. I had everyone set up a game they wanted to play or see played. Then I had everyone set up a scene in a genre they wanted to see. By the time we finished with that it was already 9:30 and my brain had officially started shutting down for the evening. We finished off with a rousing round of The Dukes of Hazard game that Jeff taught us during Bollywood.

All-in-all a solid start. Now I just need to figure out what we’re doing for the rest of the rehearsals.

You can watch last night’s rehearsal in its entirety shrunk down to 2 minutes through the glories of time lapse photography, our new favorite toy:

Wow, that was hard. We had callbacks on Wednesday night. They went really well, but I was left with the difficult task of whittling down 10 people to 2-4. In the end I opted for 4:

That's three people have been in our shows before and one newcomer. I'm excited. I think they'll stretch us in good directions and we'll stretch them likewise. Now I just have to decide what to do at these rehearsals that start Tuesday.
Posted by Alan Goy at 4:37 PM No comments:

Un-Scripted has been nominated for Best Theater Company in the SF Gate's BayList! Vote now to give kudos to local things you love -- like Un-Scripted! You need to register and login to vote, but it's wort it to vote for us, right?
Posted by Alan Goy at 9:13 AM No comments:

Sunday at the Retreat with a Time Lapse Camera

The Math of Improv! 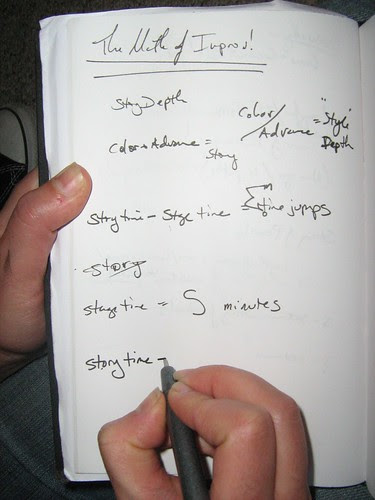 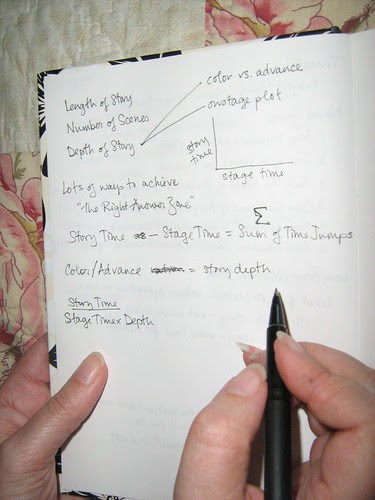 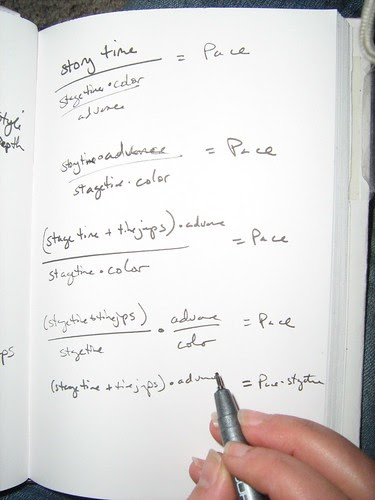 I am directing our next show, Un-Scripted: unscripted, and we had auditions Monday and Tuesday night! We always try to make our auditions as low-stress and fun as possible, and it seems to work pretty well. Both nights we did essentially the same things, so here’s the breakdown.

We started by forming a big circle so I could introduce myself and the rest of the production team, explain the show, and explain what specifically I was looking for to get cast in the show. This show is really about ensemble, so the ability to make other people look good and have a good time is very important. We’re also looking for strong committed acting skills, because once this show starts, no one ever plays themselves on stage.

Then I ran my favorite name game. At Un-Scripted we tend to call it “Alan’s Name Game” even though I lay no claim on inventing it. (In fact I recently learned that improv musician Joshua Raoul Brody invented it.) I just like to play it and generally lead it when we do. It’s a name pattern game that I’ll explain in more detail someday.

Then I had everyone break up into pairs and tell some word at a time stories. Then in different pairs I had them play What Are You Doing. There are actually 2 ways of playing that game. I had Clay set it up and since he only knew the one way (the non-sequitor way), that’s how we did it. We’ll probably play it the other way at callbacks.

At this point I wanted to dive right into scene work. Both nights we had a lot of people, so the more I could see them the better. To start with I had 5 auditioners come up on stage with 2 members of the Un-Scripted ensemble and had them do 3 scenes in a row of anything they wanted. They could set up games. They could just do scenes. It didn’t matter. Cycling through this a few times was a good way to get everyone warmed up and to see how they do in short “laughy” scenes, scenes that are about finding the quick laugh and end as soon as they’ve peaked.

After a short break, I started setting people up in scenes. Or rather, I would select the people I wanted to see and Clay would give them a set up. Then I might side coach the scene or stop it to give direction and restart it, if I wanted to push people, test their range, or simply just see how they take direction.

And that was pretty much it.

One set-up that I particularly enjoyed was rediscovering an old setup that Tara, Christian, Dave, and the Fibbs used to use a lot in workouts called “Lost in a Tank”. Basically, you’re two people in the military in a tank, but you’re lost. Only in the auditions I set four people up in the scene. It was waaaay fun with four people.

Show Description:
Our audiences loved it. We loved it. So we’re bringing it back! It’s the short form show with no set list and no format. What does that mean? We can do whatever we want! Short scenes, long scenes, games, songs, musical instrument jams, things we did long ago and want to bring back, things we've never ever tried before and always wanted to. It’s all about surprising your fellow improvisors and the audience. Once the show starts it never stops. All suggestions are gotten in character, and each scene flows seamlessly into the next without breaks for introductions, sweeping the improvisors and the audience on a ride of improvised possibility. Fun, huh?
We’re looking for improvisors with shortform experience and solid acting skills who are up for just about anything. Auditions will be Monday and Tuesday, January 12 & 13, 2009. They're group auditions, so you should plan to be there from about 7pm to 9:30pm. To sign up, email the assistant producer Bryce and let us know whether you prefer Monday or Tuesday. Bryce will send you a confirmation with your date, the location (still TBA), and your handy-dandy audition paperwork.

In order to give you the best opportunity to show us your improv skills, we try to keep our auditions as light and low-pressure as possible (more like a workout or improv jam than a normal theater audition). We'll even email you the audition paperwork ahead of time, so you can fill it out in the comfort of your own home and bring it with you. We want our auditions to be fun and stress-free, so you can just come and play with other improvisors who love improvising as much as you do.

If you'd like more information about the audition and rehearsal process, and what we might be looking for when casting, you can visit the auditions page of our website:
http://www.un-scripted.com We offer a stipend of $50 for the run of the show.

Rehearsals will begin around January 27th and continue on Tuesdays until the show is over. The show performs Thursday-Saturday, March 5 – 28 at 8pm, and Saturday matinees at 3pm, at the SF Playhouse Stage 2, 533 Sutter St. in San Francisco.