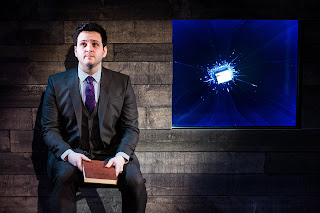 Wow, the run came and went pretty fast. As usual, I got caught up in the show and didn't chronicle much in between. Still, I wanted to take a second to talk about closing night. 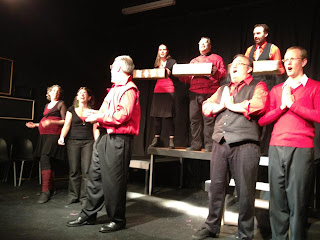 We did Let It Snow! and Tara came back from Maine to be in the show. (She was also in Theater the Musical that weekend, helping us do a fun David Mamet musical set in a museum.) Tara created Let It Snow! back in 2004, and I have a show summary for every town we've ever done for the show on this blog. I couldn't let this one go un-documented: 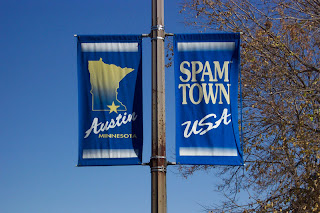 Pack 'Em In! - Saturday, August 18
As poet laureate of Austin, MN (pop 24,718), Jennifer (Susan) is working on a new poem for the holiday Spam parade when she finds out that no one in town really likes her poems. To add insult to injury, neighboring town and arch-rival Albert Lea (pop 18,016) has appointed its own poet laureate, Mary Beth (Tara). Meanwhile Wally (Alan) finds himself at the eye of the storm when he starts dating Mary Beth.  Will the mayor of Albert Lea (Bryce) swallow his pride? Can the town wrestling coach (Scott) save the day? We really pack ‘em in in Austin.

As you may have guessed, Austin is home to the Spam factory and museum: 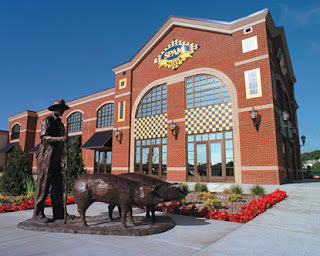 The show marked the third time Let It Snow! had ventured to Minnesota, having previously visited Hector and Hastings. If you want to check out every town the show has visited over the years, here's an interactive map:


View Let It Snow in a larger map
Posted by Alan Goy at 3:24 PM No comments:

Email ThisBlogThis!Share to TwitterShare to FacebookShare to Pinterest
Labels: Let It Snow, Un-Abridged

Un-Abridged Opening Night: The Short and the Long of It 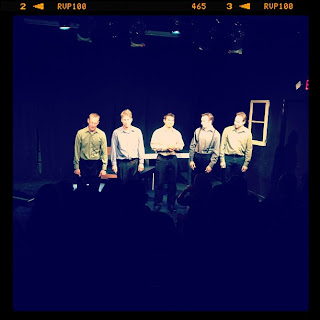 Photo by Clay from last night

Un-Abridged opened last night with the return of The Short and the Long of It. We hadn't performed that show in 7 years, but we had a wonderful cast that had mostly performed it before, back in the day. Aaron was the only except, but you wouldn't have known. Shortform is shortform after all. Glenn Etter even flew in all the way from Portland, OR to be in the show. Glenn, Christian, Dave, and I played together a lot once upon a time, so even though Glenn hadn't performed improv in... 6 years?... you wouldn't have known that either. It was like stepping into a time machine and going back to the very first run of we ever did performing for Glenn's family and Glenn's ex-family. (An entire audience at the first run of The Short and the Long of It back in 2003 was made up of Glenn's relations.)

We had a lot of fun just playing together. The scene I've heard the most about since was a retelling of Rapunzel set in IKEA. Oddly, however, that was not the scene chosen for the longform. Instead the audience picked a scene that Glenn had narrated and Aaron and Dave acted out called "Taxidermy is OK".

Now normally at this point in chronicling a performance, I might focus upon a takeaway from the show that I intend to apply to the rest of the run. That's harder to do in this run because we won't be doing The Short and the Long of It again. It's a very strange experience, doing just one performance of a show. It brings me back to the days over 10 years ago before Un-Scripted when I performed at BATS Improv. It reminds me why I love doing runs of shows.

Typically after a show, I spend some time "fixing it" in my head. I think "this would have been a stronger choice or that would have been a stronger choice". I try to learn as much as I can so the next time I'm more prepared. Maybe I think that way because I'm used to doing runs now, but I think I'm drawn to runs because I think that way. There's just something very satisfying about knowing you can go right back out there the next night and make stronger choices. Whereas in this case, I have no idea when, if ever, we'll do The Short and the Long of It again.

And most of my takeaways from last night are specific to this show. Rather than focus on Aaron and Dave's characters from "Taxidermy", we anchored the longform in the reality of the narrator. That made the second half very similar to the first in that it was a lot of short scenes rather than one long story. Now that we've learned that, we can make that choice.... Um... maybe someday. If we remember.

Still, it was a super fun show. I'm so glad I had the opportunity to play with Glenn again. You can see me tonight in Un-Scripted: unscripted, or Glenn Saturday night in You Bet Your Improvisor (it's a lot of fun).
Posted by Alan Goy at 1:00 PM No comments:

Email ThisBlogThis!Share to TwitterShare to FacebookShare to Pinterest
Labels: improv, The Short and the Long of It, Un-Abridged
Older Posts Home
Subscribe to: Posts (Atom)
The Un-Scripted Theater Company on Facebook